There is a constant struggle for existence going on all around us. In this world, running on the principle of eat or be eaten, having unparalleled senses is what makes the difference to place an organism on a side – be it land or air. The better the organism’s reception, the faster and appropriate the response is.

The land is full of animals that are ready to snap your neck and eat your brains out. So, it might seem a little less risky to hover up in the air. Well, guess what, natural selection isn’t partial. Predator-prey interactions are found in the entire biosphere.

An animal’s general habitat doesn’t make it safe. Now, all that matter, are factors. Factors such as strength, speed, bite-force, claws, grip etc.

However, these are nothing more than aids in the armory. The organism still has to take the time to react accordingly. It spots the target, plans and then attacks.

An Instinct to Kill

Wonder, what if killing becomes a “reflex”?

A reflex is an involuntary spontaneous action in response to a stimulus. The reflex arc (neural pathway involved in the reception and response) has a sensory and a motor neuron. These two are linked via an intermediate neuron present in the spinal cord. A signal perceived is relayed across from sensory towards the motor neuron. Thus, the signal never actually reaches the brain, making the response as fast as the blink of an eye (which also is a consequence of the same).

Now, what if this remarkable feature is used to act instead of to respond?

Dragonflies, infamous by the name “devil’s horse”, are one of the most efficient hunters in the animal kingdom. They usually prefer smaller flies, moths, mosquitoes, butterflies and damselflies as a meal. They are also known to show cannibalism and can feed on smaller members.

Now, you may have already noticed that the entire menu consists of organisms that can fly. Dragonflies always perform their killing in mid-air, and the stats show that they have a near 97% chance of catching a fly for meal.

Detection of sensory cues to detect predators and/or preys i.e., moving targets, is used by most animals. The ability of an animal to distinguish the target from the background is the first step in generating the appropriate response.

There are a lot of objects at once in a visual field of an organism. This is known as visual clutter. An organism must be able to specifically focus on its target against the self-generated optic flow i.e., the background.

The basic mechanism of optical sensing shows that visual data collected by the lens is focused at a region on retina called fovea. If light is focused anywhere but fovea, the vision is fuzzy. Insects carry low-spatial resolution compound eyes. Thus, target pursuing insects tend to show some “local adaptations”. They have fast photoreceptors with a region having an increased spatial resolution ability, known as a fovea.. just like a crosshair in a scope. During aerial pursuits, all the organism needs to do now is to place the image of the target in the fovea.

Thus, it’s not the sharpness of the image that matters. The precise flight control of the dragonfly to keep the target between the crosshairs is what makes the difference. Thus, the reflex is only to maintain the target in the field.

Let’s have a look at what happens in chronology-

Dragonflies as well as dipteran insects (two winged insects, also known as true-flies) have target specific descending neurons in the part of their nervous system that corresponds to the vertebrate spinal cord.

The system involved is responsible for analyzing the target’s locus with respect to the crosshairs. As soon as a prey is spotted, these neurons fire an impulse accordingly.

Just like a four-wheel drive vehicle, dragonflies can have individual control over each of its four wings at the same time. Each wing muscle has a set of motor neurons associated with it. So, if the target is a bit to the left of the crosshair center, only the parts of wings responsible for drifting the fly a bit to the left will be fired. Rest of the wing muscles handle the basic flight control. By adjusting the wing orientation, dragonflies can change the aerodynamic forces acting on each of their four wings.

This hypothesis was tested to be true by showing a dragonfly the image of a housefly (the target). Axons in the wing muscles of the dragonfly were tagged with sensors. Whenever an impulse was fired, an action potential was registered. The response was registered in the respective sensor only when the target was moved in that direction,.. thus, verifying the hypothesis.

Thus, to sum it up, a dragonfly sees its prey, which fires the neurons that control its flight in order to keep the target image formation exactly on the fovea. Rest is just grabbing the meal and consuming it.

So, job done! It sees the meal, act performed, and hunger dealt with. However, a trivial question still remains. Is everything that moves, considered a target? 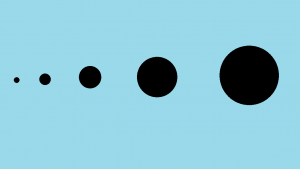 A series of experiments were performed where a dragonfly, with its descending motor neurons tagged by sensors for reading respective action potential, was shown objects (resembling targets) with variable size. The action potential was recorded only when objects much smaller than its own size, such as a fly or a mosquito, were shown. These neurons are therefore termed as small target motion detector (STMD) neurons, which can relay signals to target-selective descending neurons. Bigger objects are just considered as background clutter.

The conflict between predator and prey is a conflict between their time-worlds. However, having a killer reflex doesn’t mean that dragonflies should be at the top of the food chain. Nature has checks which ascertain a balance in the number of individuals of a given species.

Certain predatory birds do feed on the dragonflies. The reflex involved in flight is not handy only during hunting, but also helps the fly in escaping attacks. Falling temperatures, usually starting from dusk, slow both vision and reaction times of the dragonflies. Predator birds, being warm-blooded, are not affected by a temperature change, and thus most hunt dragonflies at the end of the day.

The animal kingdom is full of assassins, hustlers and tricksters. Each of them tries to equip themselves with the best of the gadgets, necessary and sufficient, to be in the game.

An instinct, however,… just takes it to a whole new level.

He is a Life Sciences Graduate from the University of Mumbai, DAE, Centre for Excellence in Basic Sciences. Writing a brief knit story to connect with people and using words instead of the usual bs, are the go-to choices under his sleeves. A keen follower of the religion of "football" and a firsthand witness of the busy subway station they call research, he sets out to take another look.

Vishal Singh
He is a Life Sciences Graduate from the University of Mumbai, DAE, Centre for Excellence in Basic Sciences. Writing a brief knit story to connect with people and using words instead of the usual bs, are the go-to choices under his sleeves. A keen follower of the religion of "football" and a firsthand witness of the busy subway station they call research, he sets out to take another look.