Every soil testing lab has its own methodology for testing soil and making nutrient recommendations.

Since the 1990s, Western Ag Labs Ltd. of Saskatoon has been using its own unique tool — the Plant Root Simulator — to analyze soil and make recommendations for its clients.

“Some farmers are very comfortable rolling the dice hard and other farmers, for whatever reason, prefer to be more conservative,” says Edgar Hammermeister, field services manager for Western Ag Labs. “Some may have a specific budget in mind. So our consultation allows us to see what the potential of the land is, how it compares between different crops for yield potential and then tailor the economics specifically to the farmer.”

That means concentrating on maximum economic yield says Hammermeister, not just the maximum yield potential of a specific crop. 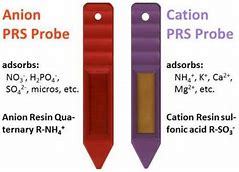 PRS probes use specially charged, ion exchange membranes that absorb nutrients directly from the soil — mechanically similar to the way a plant root takes up nutrients.

Two pairs of PRS probes are inserted into the soil under standard moisture and temperature conditions. This eliminates variables that could influence the analysis if the probes were used under field conditions.

Nutrients with a negative charge (anion) like nitrate-nitrogen, phosphorus and sulphur are adsorbed by an orange colored probe. Nutrients like ammonium, potassium, calcium, and magnesium, which have a positive charge (cation) are adsorbed by a second, purple colored probe. Micronutrients like copper, zinc, manganese, iron, and boron are measured using the orange PRS Probe.

“In warm, moist soil the microorganisms start chewing away at the organic matter and the chemistry becomes active and the nutrients will release and be dissolved in the soil water,” says Hammermeister. “Anything that is dissolved in water will have either a positive or negative ionic charge. So the probes are measuring the soil activity. I usually describe it to farmers as the PRS probes generating a horsepower rating of your soil.”

Once the soil is analyzed, the data from the probes is run through Western Ag Labs’ computer model to calculate the level of nutrient supply required for certain crops. Crop-specific factors that can influence yield potential are taken into account. These include rooting characteristics (which vary with crop type, soil physical and chemical properties) and expected growing conditions (such as moisture and heat).

The computer program determines the crop’s maximum yield potential, then produces yield response curves for nitrogen, phosphorus, and sulphur. These curves can help clients optimize their spending on nutrients.

“If the curve is very steep then that’s likely where he should put his fertilizer dollars first because that is where those dollars give the biggest economic benefit,” says Hammermeister. “As you add more fertilizer you go from a steep curve area to a shoulder area and then the curve levels off. The curves show the diminishing returns for each dollar spent. The model allows the farmer to allocate his fertilizer cost on each curve were he needs it to be.”

Out in the field

Brian Kennett is a pedigreed seed grower from southeast Saskatchewan who has been using Western Ag Labs’ PRS technology on his barley and canola crops since 2001. He first approached Western Ag labs to learn why he was getting inconsistent barley yields. “One year it would be 80 bushels per acre and the next year it would be 50,” says Kennett.

Kennett applied Hammermeister’s recommendations on a couple of fields and the first year he achieved the 88 bushels per acre barley yield he’d targeted.

“He said that our soil was capable of far more than what we were farming it at,” says Kennett, who was a little skeptical at first. “But I think the benefit of the system is we go after the right nutrient or combination of nutrients and over the years our yield average has moved up significantly and is more consistent. We don’t always hit what we are shooting for, but we are consistently at the top end of the range of what is achieved in our area.”

Specific scenarios, such as how much moisture is expected, price expectations or equipment logistics can be factored in to come up with an individualized crop nutrition plan for each client.

The best-laid plans can go awry during the growing season. To take reality into account, Western Ag Labs includes “backcasting” as part of its package. Western Ag Labs’ agronomists feed actual outcomes into the Forecaster after harvest, then run the computer functions in reverse to see how close the real outcome came to the forecast.

“We can enter how much fertilizer was actually applied and how much actual rain was received during the growing season. The impact of insect or disease issues and how they were managed are also considered in the process,” says Hammermeister.

The aim, he says, is for the recalculated yield based on the actuals to be within 90 percent or more of harvested yield. “Farmers really appreciate this because they get to see how well the model worked and how well their management worked,” says Hammermeister.

Backcasting provided Kennett with solid evidence that it might be time to roll the dice a little harder. In 2010 his neighbors were getting 50 bu./ac. canola yields; he had yet to achieve this and he wasn’t sure why. The backcasting process showed that Kennett had under fertilized.

“When we did the backcasting we looked at what we did rather than what the field had called for and took into account growing conditions over the season and we came to within a bushel of what we could possibly have achieved based on the nutrients.”

Kennett still likes the fact that the PRS system suggests options with the best economic return first, but he is now looking more carefully at other options which tell him what he would need to do and spend to target a maximum yield.

“We are still taking a good economic approach but are saying if we hit this one right we are that much further ahead and we are willing to take that risk,” says Kennett. “We feel we are at a point where we can afford a little bit more of a gamble. As a result, we have moved our yields up a little bit more.”