Active Noise Cancellation : How it works?

One of the basic accessories we possess these days is headphones. With the fast advancements in technologies, headphones are also available in various types as well as in various features. The cost of these headphones also varies based on the technology installed in it.

Recently, one of my friends bought a very expensive headphone that is said to have noise cancellation technology in it. He claimed that he boarded a flight with his headphones on and he couldn’t hear the sound of the take-off at all. Fascinated by this, I too wanted to try out the noise cancellation feature. We were in a car and yes the music felt so clear and it wasn’t interrupted by the noise of the engine. But, to my surprise, I could hear the conversation of my friends sitting at the backseat and talking to us.

Have you ever witnessed or noticed this? If not, then let’s try to figure it out.

What is Noise Cancellation?

Noise-canceling is the technology that reduces unwanted ambient sounds using active noise control. This is distinct from passive noise cancellation which uses techniques such as soundproofing to reduce ambient sound. 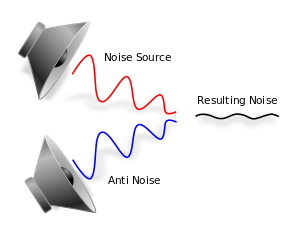 How does active noise cancellation work?

As you all know, sound waves travel in the form of longitudinal waves comprising of contractions and rarefactions of air. This means we can say that sound travels in the form of pressure change.

The principle on which it works is the destructive interference of sound waves. And we know, two waves interfere destructively when they have a phase difference of 180 degrees.

The headphone contains an electrical circuit that observes the outside noise by the use of the mic attached to it. Once the noise is detected, the pressure change pattern of the noise sound wave is observed and an equivalent sound wave with a phase change of 180 degrees is produced by the headphones itself. The original noise and the equivalent antiphase sound interfere destructively while entering our ears and thus, the noise gets canceled. This is the basic mechanism behind active noise cancellation.

But why was I able to hear the human voices and not the car engine?

The first logical question that popped up in my head was whether the headphone had proper noise cancellation or not as the claim? But, later after studying through the mechanism in detail, I came to know the true reason behind it.

Actually, the noise cancellation in headphones is more actively able to cancel the continuous mechanical noise over the fast-changing variant sound. In technical terms, the reason that the noise-canceling headphones let us hear others’ communication more clearly is that they attenuate low frequency sounds more than they attenuate high-frequency sounds.  So it acts as a sort of high-pass filter (a very poor one, but the analogy holds) letting you hear higher frequencies more clearly (still muffled, but more clearly relative to lower frequencies).

Do you believe this? It’s true! We can prove it with a simple sound-recording program called Audacity.

First, I’ve recorded two seconds of a pure tone at 440Hz (in music-speak, that’s the A above middle C). It sounds like this:

On an oscilloscope (a TV-screen used for showing waves), it has an up-and-down wave pattern like this:

2. Make an inverted version of the same pure tone

Now use Audacity to invert the sound wave. It sounds exactly the same—like this:

Put the two sound waves one above the other and you can see that they are exact opposites:

3. Add the two sounds together

With real noise reduction, it’s never possible to exactly cancel the two sounds out, so there’s always some background noise left over. But it’s still a distinct improvement.