We are all aware of the fact that plastics are one of the most common and harmful non-biodegradable waste. But, is it necessary to recycle the waste in its native form only. What if we can recycle it into some other form? Something more useful, more valuable, and more potentially efficient.

UK scientists have discovered a simple sunlight-driven process to transform plastic waste into hydrogen and other useful chemicals.

” We want to use non-recyclable waste and make something useful out of it. Plastic waste contains a lot of energy and when you throw it away, you throw away energy. Even when using biodegradable plastics, and waste is not generated, the energy in that plastic is still lost,” says Moritz Kuehnel of Swansea University. Kuehnel together with Erwin Reisner, from the University of Cambridge, and colleagues have devised a method that uses cadmium sulfide quantum dots as photocatalysts to degrade plastics.

The process, called photo-reforming, is simple. They drop the photocatalyst onto the plastic then immerse the plastic in an alkaline solution. Irradiation with sunlight reduces water from the solution to hydrogen while the plastic polymers simultaneously oxidize to small organic molecules. The group tested the system by photo-reforming three common polymers; polylactic acid, polyethylene terephthalate, and polyurethane. The results matched those of state-of-the-art hydrogen evolution photocatalysis systems that employed expensive sacrificial reagents. 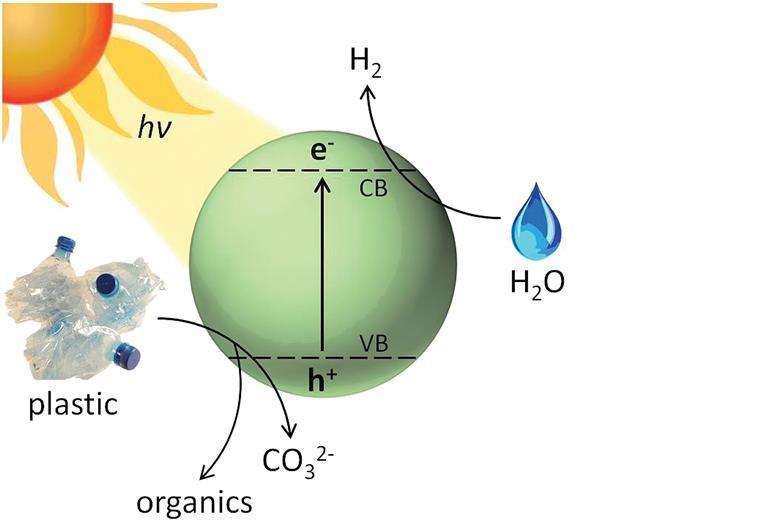 Why better than Just Recycling?

To properly recycle plastics and transform them into new useable plastics requires pure and clean materials. Plastics contaminated with food or oil are almost impossible to recycle because the impurities interfere with the recycling process, but this is not a problem with Kuehnel’s approach. ‘One of the beauties of our photo-reforming approach is that it is not very picky, it basically eats up anything that is in there.’

The team demonstrated the applicability of the process to real-world waste by photo-reforming a plastic bottle to hydrogen with an efficiency comparable to pure polymers. ‘It was a great relief that it worked,’ says Kuehnel. ‘When you do proof-of-concept chemistry you tend to work with purified materials but if you take real-world waste it is never like this, you don’t have a pure plastic and even in a plastic bottle there are plasticisers, stabilizers, coatings and all sorts of chemicals, so we were quite surprised that we could use real waste just as well as the plastics from chemical suppliers. We were worried that the stabilizers would stop us from using real waste or give a huge drop in performance.’ 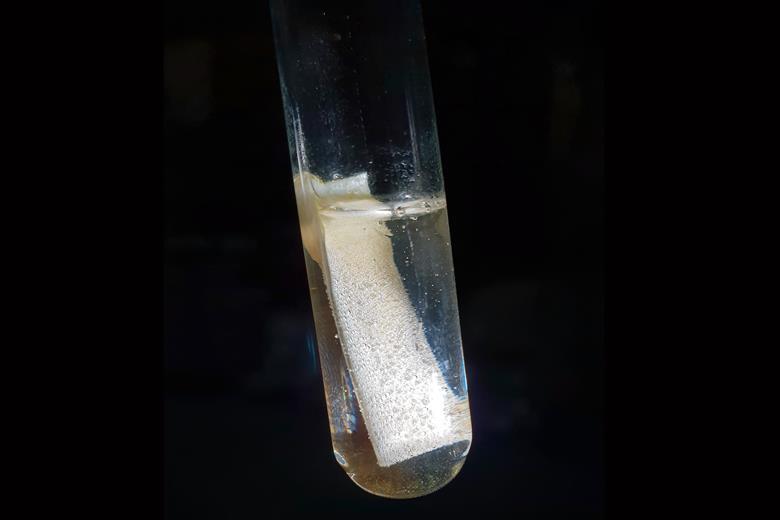 ‘This process demonstrated its great environmental and economic value in the real world, given its significant potential in converting the huge amount of plastic wastes to produce valuable chemicals and fuels,’ comments Shaohua Shen, a researcher in nanomaterial-based solar hydrogen generation at Jiaotong University in China. And Jan Baeyens, an expert on recycling plastics at the University of Warwick, UK, says ‘the work falls within the hot research topics of visible-light-driven photocatalysis, of dealing with plastic solid waste and of generating hydrogen. Further research on the bulk plastic solid waste polymers and on improving the technology to an economically viable one is still required.’

Kuehnel says they are now working to scale up the process and apply it to other types of waste. ‘Our vision is that this will be an additional way of treating non-recyclable waste. We could scale up the process and use it for treating the leftover waste in a recycling plant. Ultimately, maybe people could treat their own plastic waste in their gardens, similarly to compost, with a solar waste-reforming device. You put your plastic waste in it and get hydrogen to heat your house or fuel your car.’