In mathematics, a Diophantine equation is a polynomial equation, usually in two or more unknowns, such that only the integer solutions are sought or studied.

Diophantine problems have fewer equations than unknown variables and involve finding integers that work correctly for all equations. In more technical language, they define an algebraic curve, algebraic surface, or more general object, and ask about the lattice points on it.

One of the examples of a 3rd degree diophantine equation.

Its popularly known as the Hardy-Ramanujan number. Well, this number has an interesting story behind it.

Godfrey Hardy was a professor of mathematics at Cambridge University. One day he went to visit a friend, the brilliant young Indian mathematician Srinivasa Ramanujan, who was ill. Both men were mathematicians and liked to think about numbers.

When Ramanujan heard that Hardy had come in a taxi he asked him what the number of the taxi was. Hardy said that it was just a boring number – 1729. Ramanujan replied that 1729 was not a boring number at all,rather it was a very interesting one. He explained that it was the smallest number that could be expressed by the sum of two cubes in two different ways. 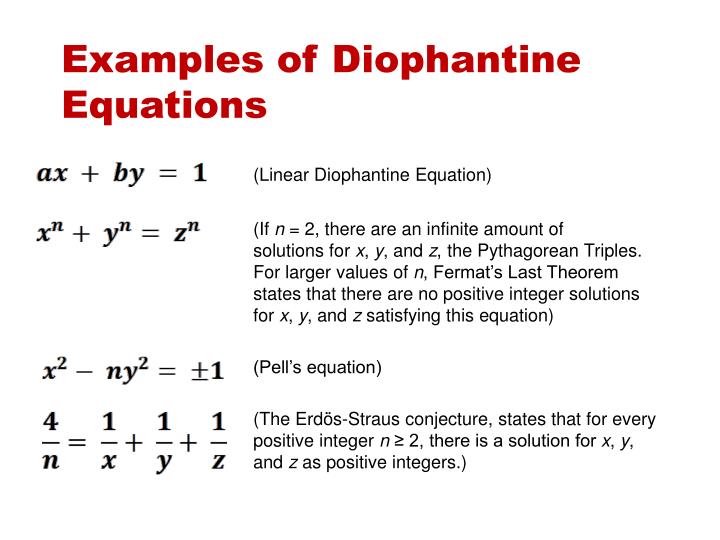 A Diophantine equation in the form

is known as a linear combination. If two relatively prime integers

are written in this form with

If GCD(a,b) not equal to c, then there are no solutions to the equation. To see why consider the equation –

is a divisor of the LHS (also notice that

must always be an integer). However,

will never be a multiple of

Now consider the case where

are relatively prime, then all solutions are obviously in the form

. If they are not, we simply divide them by their greatest common divisor. 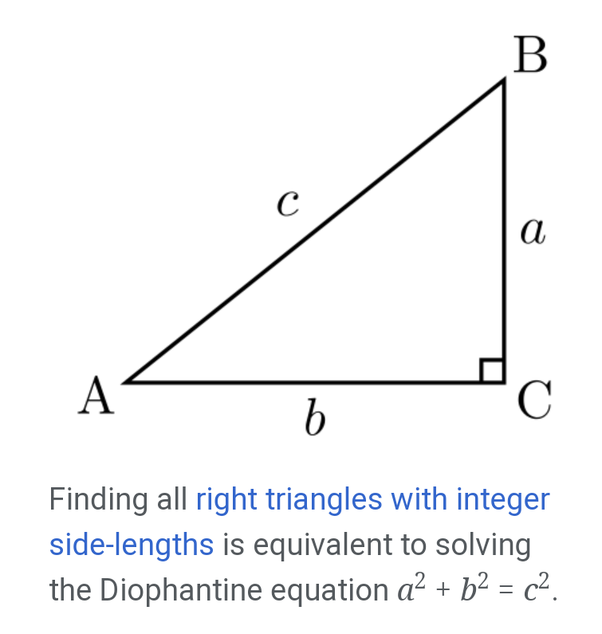 . There are three main methods of finding Pythagorean triples:

is an odd number, then

An equation of form,

has no integer solutions, as follows:

We assume that the equation does have integer solutions, and consider the solution which minimizes

. Let this solution be

would then be a solution less than

, which contradicts our assumption. Thus, this equation has no integer solutions.

, we then proceed with casework, in

Note that every square, and therefore every fourth power, is either

. The proof of this is fairly simple, and you can show it yourself.

, a contradiction since we assumed

We also know that squares are either

. Thus, all fourth powers are either

By similar approach, we show that:

This is a contradiction, as

. The solutions to the Pell equation when

is the period of the continued fraction and

th convergent, all solutions to the Pell equation are in the form

, which is just the slope-intercept equation for a line. The solutions to the diophantine equation correspond to lattice points that lie on the line. For example, consider the equation

. One solution is (0,1). If you graph the line, it’s easy to see that the line intersects a lattice point as x and y increase or decrease by the same multiple of

, respectively (wording?). Hence, the solutions to the equation may be written parametrically

(if we think of

Sometimes, modular arithmetic can be used to prove that no solutions to a given Diophantine equation exist. Specifically, if we show that the equation in question is never true mod

, then we have shown that the equation is false. However, this technique cannot be used to show that solutions to a Diophantine equation do exist.

is known as Fermat’s Last Theorem for the condition

. In the 1600s, Fermat, as he was working through a book on Diophantine Equations, wrote a comment in the margins to the effect of “I have a truly marvelous proof of this proposition which this margin is too narrow to contain.” Fermat actually made many conjectures and proposed plenty of “theorems,” but wasn’t one to write down the proofs or much other than scribbled comments. After he died, all his conjectures were re-proven (either false or true) except for Fermat’s Last Theorem. After over 350 years of failing to be proven, the theorem was finally proven by Andrew Wiles after he spent over 7 years working on the 200-page proof, and another year fixing an error in the original proof.