SciLynkCuriously Exploring Science
Home Mathematics Collatz Conjecture: A problem for which mathematics is not ready
BlogMathematicsVideos

Collatz Conjecture: A problem for which mathematics is not ready

The beauty of mathematics is the number of mysteries the numbers hold themselves. Numbers are something which we are aware of since our pre-schooling days, isn’t it? But, these numbers have also given many sleepless nights to many mathematicians.

So, what makes these simple numbers so complex? The answer will be the properties they possess.

One such problem is the Collatz Conjecture proposed by mathematician Lothar Collatz.

Let’s play a little game. Create a sequence, or list, of numbers using the following rules:

For example, consider starting with the integer 3. Since 3 is odd, we get the next term in the sequence by multiplying it by 3 and adding 1.

5 is odd, so we get the next term by multiplying it by 3 and adding 1.

A few other examples starting at different integers are as follows: 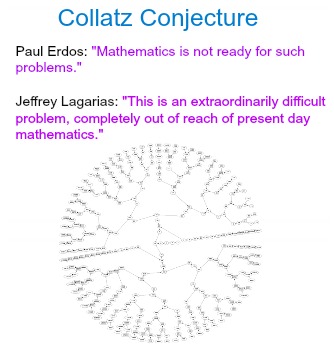 History of the Collatz Conjecture

The conjecture itself got its name from Lothar Collatz due to his research and work on the problem. That being said, Collatz does not claim the origin of the problem itself, even though many say that he first proposed it in 1937. However, again, there is no concrete evidence that this is the case.

Part of the reason that the problem’s origin is a bit sketchy is that of its difficulty. No one could produce any important results when working with the problem, so nothing was published about it until 1971. At any rate, it has kept mathematicians mystified for over 60 years since it has yet to be proven!

Proving the conjecture is said to be one of the most difficult problems in mathematics. Paul Erdos, a well-known Hungarian mathematician, once said that ”Mathematics is not ready for such problems” when discussing the conjecture and its proof. Even as recent as 2010, Jeffrey Lagarias, a mathematics professor at the University of Michigan, stated that based on what we know about the problem of proving this conjecture, ”This is an extraordinarily difficult problem, completely out of reach of present-day mathematics.’

During the current pandemic, we often hear the term herd immunity. What is Herd Immunity, you ask? Herd immunity is "resistance against...
Read more
Space

Introduction: Most chemicals impart almost the same colour irrespective of the solvent they are...
Read more
Load more

We use cookies to ensure that we give you the best experience on our website. If you continue to use this site we will assume that you are happy with it.Ok